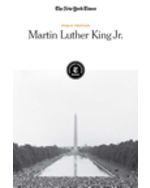 History has assigned Dr. Martin Luther King, Jr., his rightful place as a hero of the Civil Rights Movement, but what does it mean to be a hero ahead of one's own time? This exploration of the life of Dr. King compiles The New York Times's coverage of King's rise as a leader and activist and the hurdles he encountered along the way, including great resistance to his cause and his eventual assassination. In addition to coverage from his lifetime, also included are retrospectives that put the work of Dr. King in conversation with contemporary social justice efforts and reflect on just how far we have, and have not, come as a society.