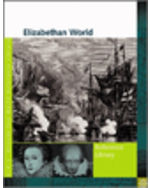 During the reign of Elizabeth I, 1558-1603, England was transformed from a backward and isolated island to a leading military power and commercial center in which culture and the arts flourished. Filling the gaps left by other Shakespearean resources, Elizabethan World Reference Library covers the broad sweep of the culture of the times, from Elizabeth's court to rural life, and from the New World explorations to the remarkable flowering of literature and drama for which the era is renowned. Perfect for both history and literatures studies, this set was designed with the student in mind: numerous illustrations for key visuals, chronology to maintain perspective, sidebars to add interest, words to know for additional clarification, subject index for easy navigation and many other features, such as research and activity ideas and further reading suggestions. The Library is divided into three separate volumes.

The Almanac focuses on major topics such as religion and politics, war and conflict, science and education, as well as the Elizabethan worldview, Elizabethan court, daily life and the culture of music, art and literature.

Biographies includes Shakespearean contemporaries and notables such as Walter Raleigh, Francis Drake, Francis Walsingham, Elizabeth I, Jane Grey, Francis Bacon, Catherine of Medici, James I, as well as Shakespeare himself.

Primary Sources is a hand-picked collection of some of the most significant and studied documents of the era, among them "Elizabeth I: Speeches," excerpts from "The Book of Common Prayer," "Pope Pius V's Bull against Elizabeth" and Shakespeare's "Richard II."

"An accessible source to consider for a wide range of students of Shakespeare and Western history." --School Library Journal, August 2007

"While world history teachers will enjoy this new addition to your references, it will be useful to literature teachers as they assign Shakespeare's plays and sonnets to their students." --Reference for Students, February 2007

"Young adults can begin their studies of the Elizabethan era in these three volumes with cumulative index, starting with an almanac covering the roots of the Elizabethans, the Reformation, the accession, the court, conspiracies, explorers and colonizers, the war with Spain, philosophy and science, the arts and drama, daily life and the last years of Elizabeth's reign. They can also examine the lives of the famous and infamous, including John Dee, Catherine de Medici, Bess of Hardwick and John Knox, and a nice range of primary sources, including exerpts from the contemporary Book of Common Prayer, a sonnet by Elizabeth, material on debates over policies relating to Catholics and a disturbing account of crime and punishment." --Booknews.com, May 2007