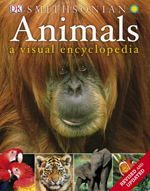 Following in the footsteps of DK's bestselling adult title Animal, Animals: A Visual Encyclopedia reveals the wonders of the animal kindgom to a younger readership. Introductory spreads provide a scientific definition of the term "animal" and show how the animal kingdom fits into the greater tree of life. The important subdivisions of the animal kingdom and the concept of classification are explained in simple terms. There is also a comprehensive look at animal habitats. The main body of the book is made up of entries on animal groups and species. Every branch of the tree is included, from jellyfish to higher mammals, but the coverage is greatest for animals of most interest to children, particularly invertebrates and mammals. Animals Encyclopedia is not a catalog of facts and photos - it is a visual celebration of the natural world. The book showcases the wonders of the animal world with world class photography and wildlife spectacles, such as the great wildebeest migration across east Africa and the feeding frenzies of hammerhead sharks. Key facts are given in note form or visually where possible, allowing information to be absorbed at a glance. Maps show geographical ranges; silhouettes reveal size relative to humans; and concise fact file entries summarize habitat, social behavior, conservation status, diet, longevity, and life history.