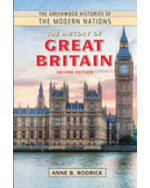 This updated and expanded volume serves as an introduction to the history of Great Britain, from prehistory to the present. Guiding the reader through complex developments in politics, economics, culture, and empire, this book helps readers to understand how the four kingdoms of England, Wales, Scotland, and Ireland have come together and split apart over centuries of change. Chronologically arranged chapters will help readers to better understand British history as it includes pre-Roman Britain, Britain's Tudors, the Reformation, and World Wars I and II, in addition to current events such as Brexit and others for which Theresa May has been prime minister. A timeline, a glossary, and an appendix of significant individuals in the history of Great Britain help to round out the text. The strong narrative line allows readers to understand the ways in which Great Britain has both responded to and guided global changes in economics and class, gender and race, and the politics of expansionism and nativism.