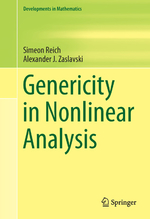 This book presents an extensive collection of state-of-the-art results and references in nonlinear functional analysis demonstrating how the generic approach proves to be very useful in solving many interesting and important problems. Nonlinear analysis plays an ever-increasing role in theoretical and applied mathematics, as well as in many other areas of science such as engineering, statistics, computer science, economics, finance, and medicine. The text may be used as supplementary material for graduate courses in nonlinear functional analysis, optimization theory and approximation theory, and is a treasure trove for instructors, researchers, and practitioners in mathematics and in the mathematical sciences.Each chapter is self-contained; proofs are solid and carefully communicated. Genericity in Nonlinear Analysis is the first book to systematically present the generic approach to nonlinear analysis. Topics presented include convergence analysis of powers and infinite products via the Baire Category Theorem, fixed point theory of both single- and set-valued mappings, best approximation problems, discrete and continuous descent methods for minimization in a general Banach space, and the structure of minimal energy configurations with rational numbers in the Aubry–Mather theory.