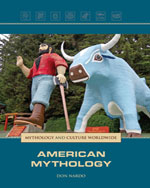 This volume of Lucent's Mythology and Culture Worldwide series looks at some of the popular myths of the modern United States and discusses their role in the culture and the values they reflect. (NOTE: Native American myths are covered in a separate volume.) This titles covers American frontier heroes, both real and imaginary, such as Davy Crockett and Paul Bunyon. It talks about legendary ghost ships, haunted houses, pirate treasure, monsters, and lost cities and relates these stories to the experiences and values of American culture.