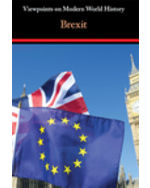 In June 2016, Great Britain shocked the world, and itself, by voting in favor of pulling out of the European Union. Far from settling a long simmering and increasingly contentious debate within the UK and Europe, the aftermath of the Brexit vote sowed only more confusion, uncertainty, and angry debate about the economic, political, and even moral consequences of turning away from Europe and adopting a more protectionist, nationalist stance. That there was no clear plan for moving ahead with an EU exit in the wake of the vote only stoked greater anger and outrage. The debate and arguments rage on and are fully represented in this comprehensive volume, as the future of the UK and Europe hang in the balance.

Front Cover.
Half Title Page.
Other Frontmatter.
Title Page.
Copyright Page.
Contents.
Foreword.
1: Introduction.
2: The Path to Brexit.
3: Perspectives, Controversies, and Debates.
4: What's Next for the UK, the EU, and the World?.
Chronology.
Bibliography.
Index.