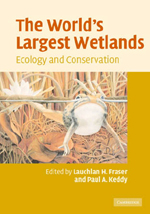 During the past century approximately fifty percent of the world's wetlands has been destroyed, largely due to human activities. Increased human population has lead to shrinkage of wetland areas, and data show that as they shrink, their important functions decline. Reduced wetland area causes more flooding in Spring, less available water during drought, greater risk of water pollution, and less food production and reduced carbon storage. Much of the remaining pristine wetland systems are found in the world's largest wetlands, and yet these areas have received surprisingly little scientific research or attention. This volume presents the views of leading experts on each of the world's largest wetland systems. Here, this international team of authors share their understanding of the ecological dynamics of large wetlands and their significance, and emphasise their need of conservation.

Published in 2005 in print format.