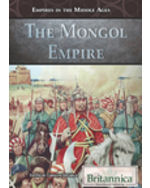 Empires in the Middle Ages: The Mongol Empire, 1st Edition

Under the leadership of Genghis Khan, a confederation of nomadic farmers transformed into a powerful military force. This text demonstrations how an aggressive empire could have been established from such agrarian roots, inviting the reader to follow the rise of the Mongol Empire from its founding through its expansion into the Golden Horde in the West under the leadership of Batu and his successors and the Yuan Dynasty in the East under Kublai Khan. It also features the Mongol Empire's important role in the development of trade between the East and the West during the Middle Ages, particularly as recorded by Venetian merchant Marco Polo.