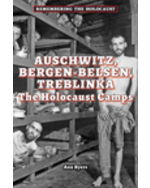 The Nazis set up concentration and death camps in order to isolate, torture, and murder millions of men, women, and children. In this work, author Ann Byers details the system of camps in Europe during the Holocaust. Byers recounts the horrifying conditions suffered by camp inmates as well as their struggles for life and hope in a world gone mad. The remains of many camps still stand today to serve as a chilling reminder of the Holocaust. This book is developed from The Holocaust Camps to allow republication of the original text into ebook, paperback, and trade editions.