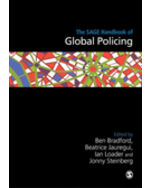 This text examines and critically retraces the field of policing studies by posing and exploring a series of fundamental questions to do with the concept and institutions of policing and their relation to social and political life in today's globalized world.

Front Cover.
Half Title Page.
Other Frontmatter.
Title Page.
Copyright Page.
Contents.
Notes on the Editors and Contributors.
1: Global Policing Studies: A Prospective Field.
Lenses.
2: Political Theory, Institutional Purpose and Policing.
3: Disentangling the ‘Golden Threads’: Policing the Lessons from Police History.
4: Beyond the Social Control of Space: Towards a Multidimensional Approach to Local Security Networks.
5: The Color of Safety: The Psychology of Race and Policing.
6: Police, the Rule of Law, and Civil Society: A Philosophical Perspective.
7: The Anthropology of Police.
8: Police Lawfulness and Public Security.
9: Literature and Global Policing.
Social and Political Order.
10: Police and State.
11: Global Policing and the Nation-State.
12: The Police and Inequality: Tales from Two Cities.
13: Policing Difference.
14: Policing and Human Rights1.
15: Police, Crime and Order: The Case of Stop and Search.
16: War, Policing, and Killing.
17: Freedom, Policing and Urban Liberalism.
Legacies.
18: Policing after Colonialism.
19: Policing after State Socialism.
20: Policing after Dictatorship in South America.
21: Policing after the Revolution: The Emergence of Professional Police in New China.
22: Policing after Civil Rights: The Legacy of Police Opposition to the Civil Rights Movement for Contemporary American Policing.
Problems and Problematics.
23: Modernization and Development as a Motor of Polity and Policing.
24: New Animism in Policing: Re-animating the Rule of Law?.
25: Countering Transnational Terrorism: Global Policing, Global Threats and Human Rights.
26: Police in Armed Conflict.
27: Local Dynamics of a Global Phenomenon: Policing Organized Crime.
28: Police, ‘Police’ and the Urban.
29: Global Policing and Mobility: Identity, Territory, Sovereignty.
30: Towards a Global Control? Policing and Protest in a New Century.
31: The Market for Global Policing1.
32: Policing and New Environmental Governance.
33: Policing by and for Women in Brazil and Beyond.
34: Complex Needs in Policing: Training, Responsibility and Contestation in Late Neoliberalism.
Index.