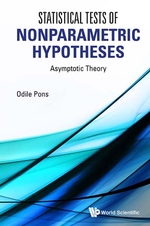 An overview of the asymptotic theory of optimal nonparametric tests is presented in this book. It covers a wide range of topics: Neyman-Pearson and LeCams theories of optimal tests, the theories of empirical processes and kernel estimators with extensions of their applications to the asymptotic behavior of tests for distribution functions, densities and curves of the nonparametric models defining the distributions of point processes and diffusions. With many new test statistics developed for smooth curves, the reliance on kernel estimators with bias corrections and the weak convergence of the estimators are useful to prove the asymptotic properties of the tests, extending the coverage to semiparametric models. They include tests built from continuously observed processes and observations with cumulative intervals.