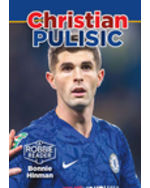 Soccer is Christian Pulisic's whole life right now. Christian says that a year spent in England when he was seven helped him decide that soccer would be his life. Fans are watching closely to see what he will do since he was signed to the Chelsea Football Club in England. Open this book to read about Christian's early years and his meteoric rise as one of the world's greatest soccer players.