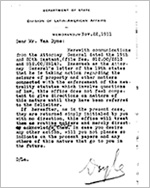 Revolution in Mexico, the 1917 Constitution, and Its Aftermath

This collection of U.S. State Department records consists of political and military documents relating to the Mexican Revolution and its aftermath -1910-1924. These unique and insightful records provide an unprecedented look at the Mexican Revolution, which began in 1910 and continued sporadically until the new Constitution was adopted in 1917, through to and including the election of Calles.