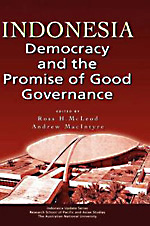 Indonesia: Democracy and the Promise of Good Governance, 1st Edition

Cover Page.
Half Title.
Other Frontmatter.
Title Page.
Copyright Page.
Contents.
List of Tables and Figures.
List of Contributors.
Acknowledgments.
Glossary.
Introduction.
1: Forming and Reforming the Architecture of Governance.
2: Indonesia's Constitutional Change Reviewed.
3: Electoral and Political Party Reform.
4: Tracing the Progress of Local Governments Since Decentralisation.
5: The Roles of Government.
6: The State and the Market in Democratic Indonesia.
7: Government and Private Business: Rents, Representation and Collective Action.
8: Muslim Politics in Indonesia's Democratisation: The Religious Majority and the Rights of Minorities in the Post-New Order Era.
9: Children, Welfare and Protection: A New Policy Framework?.
10: The Institutions of Government.
11: The Civil Service: Towards Efficiency, Effectiveness and Honesty.
12: The Constitutional Court's Decision in the Dispute Between the Supreme Court and the Judicial Commission: Banishing Judicial Accountability?.
Index.
Indonesia Update Series.