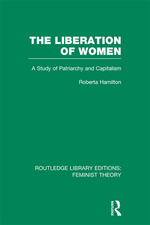 The Liberation of Women (RLE Feminist Theory): A Study of Patriarchy and Capitalism, 1st Edition

In The Liberation of Women , Roberta Hamilton explores two of the key questions that have been systematically raised by the Women's Liberation Movement: why have women occupied a subordinate position in society and how can the variation in the forms and intensity of their exploitation and oppression be explained? Within the Women's Liberation Movement there have been seen to be two different and opposed answers to these questions: a feminist answer and a Marxist one. The feminist analysis has addressed itself to a patriarchal ideology, locating the source of male domination and female subordination in the biological differences between the sexes. Marxists, on the other hand, have seen the origins of female subordination in the growing phenomenon of private property, which, in their view, has made possible and necessary the exploitation of these biological differences in the modern world. This new work attempts to examine this debate in specific analytical terms through a study of the changing role of women during a particular historical period – the seventeenth century. In the course of less than one hundred years the rise of capitalism and the acceptance of Protestantism had separately and together radically altered every aspect of a woman's life. Can both a feminist and a Marxist analysis account for these changes? Do such accounts conflict with each other, making a choice inevitable? Do they overlap to such an extent that retaining both would be redundant? Or, finally, are they complementary, can they usefully coexist? To answer these questions Roberta Hamilton tries to work out the changes that can be attributed to the emergence of capitalism (a Marxist explanation) and those that stemmed from the transformation in patriarchal ideology (a feminist explanation).