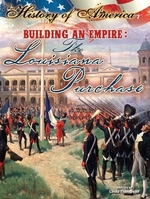 With the Louisiana Purchase in 1803, the United States purchased approximately 828,000,000 square miles of territory from France, thereby doubling the size of the young republic. What was known as Louisiana Territory stretched from the Mississippi River in the east to the Rocky Mountains in the west, and from the Gulf of Mexico in the south to the Canadian border in the north. Part or all of 15 states were eventually created from the land deal, which is considered one of the most important achievements of Thomas Jefferson’s presidency. This title will allow students to analyze the interactions between individuals, events, and ideas in a text.