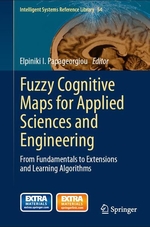 Fuzzy Cognitive Maps (FCM) constitute cognitive models in the form of fuzzy directed graphs consisting of two basic elements: the nodes, which basically correspond to "concepts" bearing different states of activation depending on the knowledge they represent, and the "edges" denoting the causal effects that each source node exercises on the receiving concept expressed through weights. Weights take values in the interval [-1,1], which denotes the positive, negative or neutral causal relationship between two concepts. An FCM can be typically obtained through linguistic terms, inherent to fuzzy systems, but with a structure similar to the neural networks, which facilitates data processing, and has capabilities for training and adaptation.During the last 10 years, an exponential growth of published papers in FCMs was followed showing great impact potential. Different FCM structures and learning schemes have been developed, while numerous studies report their use in many contexts with highly successful modeling results.  The aim of this book is to fill the existing gap in the literature concerning fundamentals, models, extensions and learning algorithms for FCMs in knowledge engineering. It comprehensively covers the state-of-the-art FCM modeling and learning methods, with algorithms, codes and software tools, and provides a set of applications that demonstrate their various usages in applied sciences and engineering.