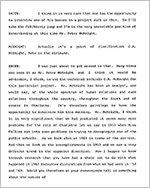 The Ralph J. Bunche Oral History Collection from the Moorland-Spingarn Research Center at Howard University, Washington, D. C., is a unique resource for the study of the era of the civil rights movement in the United States. Included here are transcriptions of close to 700 interviews with those who made history in the struggles for voting rights, against discrimination in housing, for the desegregation of the schools, to expose racism in hiring, in defiance of police brutality, and to address poverty in the African American communities. Originally envisioned by the late United Nations Secretary Ralph J. Bunche, the body of interviews was first known as the Civil Rights Documentation Project and has been critical to African American scholarship about this period since the first interviews became public in the late 1970's. The alphabetical guide to the names of those interviewed reveals the astounding range of the project. The elite and most respected national figures in the civil rights movement, the founders of numerous Black Power organizations, scholars who developed African American studies as a discipline, educators, lawyers, church leaders, and grassroots organizers from both the rural South and the urban North are all present. They share their diverse views on the anatomy of pivotal struggles, tell stories about their personal political trajectories, and, as a whole, offer insight into the reality of movement life.