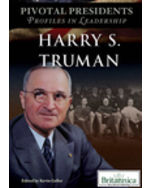 After Franklin D. Roosevelt’s sudden death in April 1945, Harry S. Truman took the oath of office as the thirty-third US president. While perhaps best known for his controversial decision to drop atomic bombs to end combat with Japan in World War II, Truman was instrumental in postwar recovery and international relations. As readers will discover, he instituted the Truman Doctrine to fight the spread of Communism, approved the Marshall Plan to help rebuild Europe, and ordered armed forces in 1950 to assist South Korea in the Korean War. He also ended racial segregation in the US military and removed discriminatory practices in federal employment.