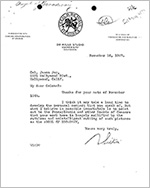 The Motion Picture Association of America (MPAA) Production Code Administration Files collection documents forty years of self-regulation and censorship in the motion picture industry. The Production Code was written in 1929 by Martin J. Quigley, an influential editor and publisher of motion picture trade periodicals, and Reverend Daniel A. Lord, a Jesuit advisor to Hollywood filmmakers. Officially accepted in 1930 by the Motion Picture Producers and Distributors of America (MPPDA), the precursor organization to the MPAA, the Production Code presented guidelines governing American movie production. The five hundred titles selected were chosen by the staff of the library's Special Collections Department, with advice from film historian Leonard J. Leff.