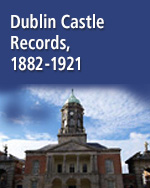 The Dublin Castle administration in Ireland was the government of Ireland under English and later British rule, from the twelfth century until 1922, based at Dublin Castle. Dublin Castle Records, 1798-1926 contains records of the British administration in Ireland prior to 1922, a crucial period which saw the rise of Parnell and the Land War in 1880 through to the establishment of the Irish Free State in 1921. This collection comprises materials from Series CO 904, The National Archives, Kew, UK.