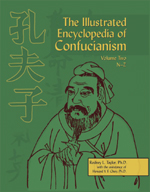 Confucianism can be defined as the teachings of practices associated with the historical teacher Confucius and his followers from the sixth century B.C.E. through the twentieth century.

Confucius saw in his own lifetime a world torn by civil strife. He sought to remedy its ills by teaching of a golden age when virtue prevailed. For Confucius, moral order could be brought to the world by emulating the ways of the ancient sage-kings. Fundamentally, his teachings stressed the establishment of proper relations and respect between human beings. Confucius taught that each person had moral responsibilities to those around him. One was to develop one's life, as well as one's society, into a microcosm of the moral order of the universe itself; that is, the Way of Heaven.

Confucianism flourished within China, but also influenced the cultures of Korea, Japan, parts of Southeast Asia, and, recently, the West. This comprehensive, two-volume encyclopedia clearly and effectively defines the major forces of Confucianism and shows us its relevance for the present day.