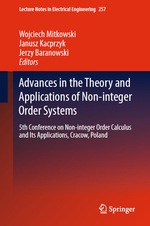 Advances in the Theory and Applications of Non-integer Order Systems, 1st Edition

This volume presents various aspects of non-integer order systems, also known as fractional systems, which have recently attracted an increasing attention in the scientific community of systems science, applied mathematics, control theory. Non-integer systems have become relevant for many fields of science and technology exemplified by the modeling of signal transmission, electric noise, dielectric polarization, heat transfer, electrochemical reactions, thermal processes,  acoustics, etc. The content is divided into six parts, every of which considers one of the currently relevant problems. In the first part the Realization problem is discussed, with a special focus on positive systems. The second part considers stability of certain classes of non-integer order systems with and without delays. The third part is focused on such important aspects as controllability, observability and optimization especially in discrete time. The fourth part is focused on distributed systems where non-integer calculus leads to new and interesting results. The next part considers problems of solutions and approximations of non-integer order equations and systems. The final and most extensive part is devoted to applications. Problems from mechatronics, biomedical engineering, robotics and others are all analyzed and solved with tools from fractional systems. This volume came to fruition thanks to high level of talks and interesting discussions at RRNR 2013 - 5th Conference on Non-integer Order Calculus and its Applications that took place at AGH University of Science and Technology in Kraków, Poland, which was organized by the Faculty of Electrical Engineering, Automatics, Computer Science and Biomedical Engineering.