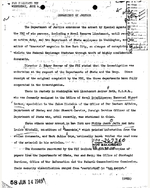 The Amerasia Affair was the first of the great spy cases of the postwar era. It prompted several congressional investigations, stirred-up partisan controversy and threatened to destroy the political reputations of several government officials.