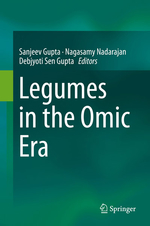 In this post-genomic era, enormous amounts of biological information could be of potential use for crop improvement applications. This aspect of genomics-assisted plant breeding is throughout the book for important grain legume crops. Role of functional genomics and importance of bioinformatics tools in present day genomics and molecular breeding research are also discussed in detail. A chapter on fungal disease resistance elucidates potential application of genomic tools in molecular breeding of grain legume species. The book contains 15 chapters contributed by 50 scientists who are actively involved in analyzing and improving particular legume genome. This book will serve as reference resource to legumes researchers for use of genome information in improvement of major legume crops.  Dr Sanjeev Gupta is Principal Scientist/Project Coordinator-All India Coordinated Research Project on Vigna Crops at Indian Institute of Pulses Research (IIPR), Kanpur and has more than 20 years of research experience in grain legume breeding and developed a number of high yielding cultivars in grain legumes. He has authored numerous research papers published in peer-reviewed journals and edited books in plant breeding aspects. Dr. Nagasamy Nadarajan is the Director of the Indian Institute of Pulses Research (IIPR), Kanpur, and has more than 30 years of teaching and research experience and developed more than 15 legume and cereal cultivars. He has published more than 200 articles in peer-reviewed publications. He has guided several graduate students in food legume breeding and genetics research. Mr. Debjyoti Sen Gupta is the ICAR International Fellow and PhD candidate at  North Dakota State University, Fargo. He has authored several research articles, review articles and book chapters in the peer-reviewed journals and books from reputed publishers such as Springer, CABI, etc.