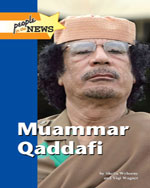 This book covers the life and political actions of Muammar Qaddafi, the former dictator of Libya (1969-2011). Qaddafi was one of the most famous, and famously bizarre, political leaders of the modern age. Throughout 2011, he was frequently in the news during the uprising of the Libyan people against his dictatorship. This book discusses Qaddafi's quest for power and influence in world politics, his desire to earn a place in history as a great man, as well as his aptitude for reinventing himself again and again. Particular attention is given to explaining the impact that Qaddafi's political experiments had on the people of Libya. Readers will learn about Qaddafi's childhood, rise to power, and merciless downfall as well as some of Libya's cultural and political history.