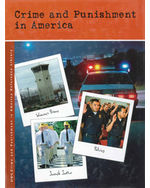 Covering the evolution of the American criminal justice system throughout history, the Crime and Punishment in America Reference Library explores everything from juvenile justice to organized crime.

"This biographical reference on crime and punishment in America brings together some of the more notorious criminals, prosecutors, attorneys, judges, writers and legal minds. Included are J. Edgar Hoover, authors, Dickens and Capote, Ted Kaczynski and Timothy McVeigh to list a few. Each chapter highlights people and events of special interest to student research with additional sources listed at the end of each chapter. Also included are many black and white photographs, a timeline, a glossary and a subject index." --Pennsylvania School Librarians Associations, May 2006