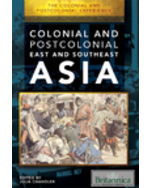 Much of East Asia and Southeast Asia were unaffected by colonialism until the 19th century, when European nations, the United States, and Japan spread their influence and control throughout the continent of Asia. This resource traces the impact of foreign rule on the region, gaining insight into the many wars and policies that affected the local people, economy, and society. Though most of the modern-day countries of East and Southeast Asia gained independence in the wake of World War II, the impact of colonialism lingers on.