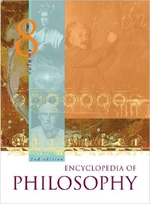 The Encyclopedia of Philosophy, 2nd Edition

Since 1967, the Encyclopedia of Philosophy, described by Booklist as "the best and most comprehensive English-language reference source for philosophy," has been the cornerstone of the philosophy reference shelf. Lauded for its clear and accessible presentation of wide-ranging philosophical subjects, the Encyclopedia has earned its place as a first-stop resource for general readers, students and educators. A Supplement to the first edition was released to critical acclaim in 1996. A new and updated edition of this multivolume set -- the first comprehensive new edition in almost 40 years -- has been compiled under the close guidance of a 21-member board of scholars headed by Donald Borchert (Ohio University). Containing material from hundreds of highly distinguished contributors representing the world's top universities and institutions, the second edition has a truly global perspective. It contains more than 2,100 entries -- including more than 450 new articles. Among the many topics covered are African, Islamic, Jewish, Russian, Chinese, and Buddhist philosophies; bioethics and biomedical ethics; art and aesthetics; epistemology; metaphysics; peace and war; social and political philosophy; the Holocaust; feminist thought; and much more. Additionally, the second edition also features 1,000 biographical entries on major figures in philosophical thought throughout history.

"This encyclopedia will be useful to researchers, scholars, and students. It is written in clear, jargon-free English so that even the educated layperson will be able to use it easily. The Encyclopedia of Philosophy will find much use in larger academic and research libraries." --ARBA, March 2007

"Encyclopedia of Philosophy, second edition, is highly recommended for academic and public libraries and will be indispensable to most." --Booklist, June 2006

"The first edition of Encyclopedia of Philosophy, published in eight large volumes in 1967, was the standard philosophy reference for more than a generation. Now comes the second edition, offering hundreds of new articles, addenda to earlier articles, and updated bibliographies." Booklist, January 15, 2007

"While preserving many entries from the 1967 edition, this version adds 450 items on new topics and 300 newly authored versions of prior topics. New subfields like feminist philosophy and applied ethics are covered, as is the philosophy of love and sex in an excellent article by Alan Soble. The 'just war theory' entry should be required reading for all politicians." --Library Journal, April 15, 2007