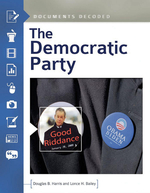 Today's Democratic Party would be unrecognizable to Democrats in the 1800s. Through an examination of key historical documents, this book chronicles the Democratic Party's complete transformation from the small-government, Jeffersonian party to a party of activist government and social progressivism during the presidencies of Franklin D. Roosevelt, Lyndon Johnson, Bill Clinton, and Barack Obama. What are the objectives of today's Democratic Party, and what historic events have guided its evolution from a decidedly different ideological starting point more than 200 years ago? The Democratic Party: Documents Decoded supplies a thorough historical examination of the Democratic Party from its distant origins in George Washington's administration to the two-term administration of Barack Obama. Told through key documents and speeches, this history comes alive in the words and thoughts of those who built, sustained, and transformed the Democratic Party. No other book uses documents in this way to tell a comprehensive history of this party. The book utilizes primary documents to investigate a breadth of topics such as the Democratic party's positions on civil rights, discrimination, voting rights, taxation, representation, immigration, primary elections, caucuses, the Republican opposition, relations between church and state, the role of government, and foreign policy. The scholarly commentary provides essential context that bridges the gaps between documents and insightful explanations and clarifications of specific passages or terms to ensure reader comprehension. A work unlike any other on the history of the Democratic Party, this book will serve advanced high school students in government and history classes as well as undergraduate students taking courses in political science and history.