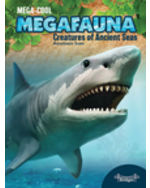 For thousands of years, people found rocks that they thought were giant dragon tongues that had fallen from the sky. But they were looking in the wrong direction! These fossils were actually the teeth and bones of creatures that lived in the waters long, long ago. What other mega-sized, mega-cool creatures lived in the ancient seas? Let's explore MEGA Creatures of Ancient Seas! The MegaCool MegaFauna series explores the history of some of the most massive creatures that ever lived. They swam in the seas, walked the lands, and soared through the skies. Some are even still alive today! Learn how mega-cool megafauna are related to (or are even examples of) modern living things. These awesome extra-large animals have an amazing history, so let's start exploring.