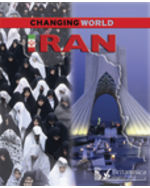 In Iran , part of the Changing World series, students learn that Iran, formerly known as Persia, is one of the world's oldest civilizations. Since the revolution in 1979, Iran has been governed as an Islamic Republic with an ayatollah, or Shia religious leader, as its supreme ruler. This has led to profound changes and tensions in Iranian society.