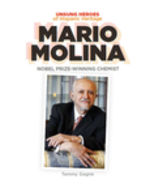 Mario Molina knew at a young age that he wanted to grow up to become a scientist. He studied chemistry in his native Mexico before heading off to other countries to learn and prepare for the wondrous career that awaited him in the field. He soon put his curiosity and knowledge to work as a research chemist. In the early 1970s, he made a startling discovery which led him to an upsetting theory. Chemicals that industrial companies were releasing into the world's atmosphere were destroying the Earth's ozone layer. Although many people were not pleased to hear Molina's theory, other scientists eventually confirmed it. Read more about Mario Molina and how he received the Nobel Prize for alerting the world to this problem that threatened the very existence of life on Earth.