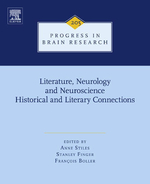 This well-established international series examines major areas of basic and clinical research within neuroscience, as well as emerging and promising subfields. This volume on the neurosciences, neurology, and literature vividly shows how science and the humanities can come together --- and have come together in the past. Its sections provide a new, broad look at these interactions, which have received surprisingly little attention in the past. Experts in the field cover literature as a window to neurological and scientific zeitgeists, theories of brain and mind in literature, famous authors and their suspected neurological disorders, and how neurological disorders and treatments have been described in literature. In addition, a myriad of other topics are covered, including some on famous authors whose important connections to the neurosciences have been overlooked (e.g., Roget, of Thesaurus fame), famous neuroscientists who should also be associated with literature, and some overlooked scientific and medical men who helped others produce great literary works (e,g., Bram Stoker's Dracula). There has not been a volume with this coverage in the past, and the connections it provides should prove fascinating to individuals in science, medicine, history, literature, and various other disciplines. This book looks at literature, medicine, and the brain sciences both historically and in the light of the newest scholarly discoveries and insights.