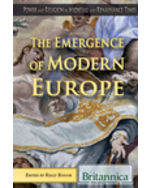 Power and Religion in Medieval and Renaissance Times: The Emergence of Modern Europe, 1st Edition

The sixteenth century in Europe was a period of vigorous economic expansion that led to social, political, religious, and cultural transformations and established the early modern age. This resource explores the emergence of monarchial nation-states and early Western capitalism during this period. Also examined in depth are the Protestant Reformation and the Counter-Reformation, which exacerbated tensions between states and contributed to the Thirty Years’ War (1618–1648). Readers will come to understand how these events developed, how they led to the age of exploration, and how they inform modern European history.