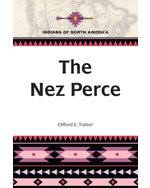 The Nez Perce, part of the Indians of North America series, presents a fascinating portrayal of the history and culture of these native people. Aboriginal inhabitants in parts of Idaho, Washington, and Oregon, the Nez Perce faced dramatic changes to their peaceful way of life after they welcomed members of the Lewis and Clark Expedition in 1805 and 1806. In the middle of the 19th century, the U.S. government pressured Nez Perce leaders to sign away a vast majority of their original 13-million-acre territory. But one of their leaders, Chief Joseph, made a valiant attempt to remain free, leading followers toward Canada and engaging the U.S. Calvary in battle until they were overtaken just 40 miles south of the Canadian border. Today, the Nez Perce manage their own government, operate local businesses, and control their own schools, health services, and courts.