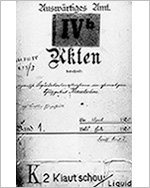 This collection provides documentation on Germany's relations with China during the interwar period. Germany was instrumental in modernizing China's industrial base and provided a military training mission and equipment for the armed forces of the Republic of China prior to the Second Sino-Japanese War. The Republic of China, which succeeded the Ming Dynasty in 1912, was fraught with factional warlordism and foreign incursions. The Northern Expedition of 1928 nominally unified China under Kuomintang (KMT) control, yet Imperial Japan loomed as the greatest foreign threat. The Chinese urgency to modernize the military and its national defense industry, coupled with Germany's need for a stable supply of raw materials, put the two countries on the road of close relations from the late 1920s to the late 1930s. Although intense cooperation lasted only from the Nazi takeover of Germany in 1933 to the start of the war with Japan in 1937, and concrete measures at industrial reform started in earnest only in 1936, it had a profound effect on Chinese modernization and the capability of the Chinese to resist the Japanese in the war.