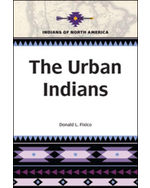 Urban Indians, part of the Indians of North America series, reveals the long history Native Americans have had as city dwellers. From the Maya of Mesoamerica to the Anasazi of the Southwest, Indian groups throughout North America established large, permanent settlements hundreds—even thousands—of years ago. By the 17th century, newcomer settlements had overtaken Indian urban centers in importance and size, and some Indians moved to U.S. cities in the centuries that followed to trade or find wage work. After World War II, Indians begin to migrate to urban centers in large numbers, many of whom were encouraged to leave their reservations by the federal government's relocation program.