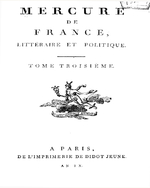 Published from 1672, this influential periodical promised in its first issue to chronicle the activities of luminaries in metropolitan Paris, in the French provinces, and abroad, and to offer good literature to lovers of novels and stories. It was published first under the title Le Mercure Galant by Donneau de Vise. Upon his death it was taken over by Riviere Dufresny (1710), then Lefevre de Fontenay (1714), and Abbot Bucher. In 1724 the title was changed to Le Mercure de France, and the periodical was split into a literary and a political section.