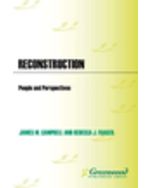 Reconstruction was a time of contradictions and conflicts, great expectations and widespread violence. As 4 million formerly enslaved African Americans embraced freedom and struggled to strengthen communities and secure new livelihoods and equal rights, white southerners struggled, often violently, to reconcile themselves to a world without slavery in ways consistent with deeply held, white supremacist beliefs.

Reconstruction: People and Perspectives is a fascinating collection of essays and documents that illuminates the experiences of ordinary Americans across all levels of society in the southern United States during Reconstruction. It describes in vivid detail the experiences of a diverse group of people caught up in the Civil War's aftermath in the South. Chapters focus on Civil War veterans, former slaveholders, farmers and city residents, Northerners in the South, and African American men and women (both those who stayed in the South and those who migrated). It also reports on groups similar studies often overlook, such as Native Americans and white women. Looking at Reconstruction from a social historian's point of view, this revealing work adds a much needed new voice to studies of the era.