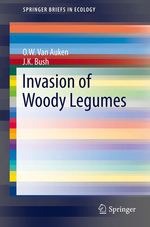 Includes our current knowledge of the invasion or encroachment and cause of population growth and spread of some dry land, arid zone woody legumes. Community structure, population growth, and competition of these woody legumes will also be examined. These species and ecosystems are both extensive and dynamic. They occur worldwide, but mainly in the arid zones of the tropics and sub-tropics. The cause of the growth and spread of these species and communities has long been claimed to be caused by distal factors rather than proximal ones. However, these species appear to be influenced and perhaps controlled by anthropogenic factors, specifically grazing and fire or lack of fire. Their overall worldwide distribution has probably changed little in the recent past, but their populations have expanded into grasslands and their density has increased in many places. Some associated communities have shown dramatic changes in response to recent large-scale droughts and the loss of most of the dominant overstory species. However, changes in the woody legume communities and their species are generally unknown. ​