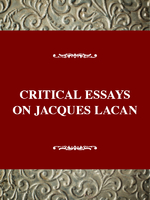 French psychoanalyst who gained an international reputation as an original interpreter of Sigmund Freud's work.