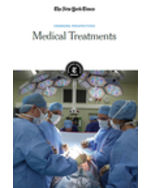 Since the mid-nineteenth century, medicine has undergone a revolution, improving the quality and length of human life in the process. With fascinating detail, this volume traces the evolution of treatments for a variety of conditions. Antiseptics and anesthesia made surgery possible and survivable. Vaccines wiped out the lethal illnesses of cholera, typhus, polio, yellow fever, and others. While smallpox was declared officially eradicated in 1980, another devastating disease surfaced on the world stage, HIV/AIDS, to further challenge the development of medical treatments. Today, DNA, artificial intelligence, and stem cell therapy are some of the weapons used to fight against pain and disease. Media literacy terms and questions round out the text and aid readers in analyzing over a century of news coverage.