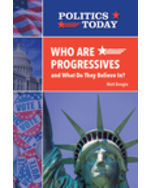 Politics Today: Who Are Progressives and What Do They Believe In?, 1st Edition

Progressivism has been growing in political power in recent years, with its believers becoming more vocal and prominent on the national stage. This volume discusses the roots of progressivism in the European Enlightenment and follows its history through the splitting of the U.S. Republican Party in the early 1900s to the re-emergence of progressive policies as a reaction to the Trump administration. The book also considers progressivism as a response to rapid modernization and unchecked capitalism, while explaining how progressive economic policies affect the national economy and how progressive social policies challenge established American values.