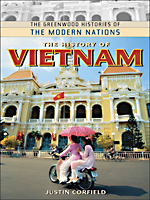 The History of Vietnam, 1st Edition

Everyone knows Vietnam for its turbulent environment during the second half of the 20th century, but few know that archaeologists believe that civilization there existed as far back as the Bronze Age. Vietnam's history runs rampant with clashing dynasties, civil wars and power struggles between the North and South, and conflicts with neighboring and other countries. First ruled under China's close watch for centuries, Vietnam fell under conflicting commands of France and Japan during the 19th and 20th centuries-finally leading to the split of North and South Vietnam, and ultimately, the Vietnam War. Today, Vietnam still struggles with its scars from the past, but is slowly emerging as its own country, independent of China and France.