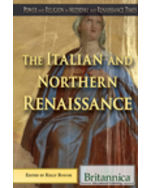 Power and Religion in Medieval and Renaissance Times: The Italian and Northern Renaissance, 1st Edition

The modern period of history is often considered to have begun with the Renaissance, one of the rare periods of genius in the world’s history. This volume traces the Renaissance from its beginnings in Italy in the fourteenth century to its spread across the rest of Europe in the sixteenth and seventeenth centuries. Along with the rediscovery of ancient Greek and Roman writing, the Renaissance represented a new age in the fields of science, literature, religion, politics, and many others. Readers will learn about the great thinkers of their era and how their beliefs radically changed the landscape of Europe.