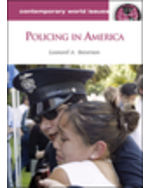 Americans seem to be fascinated by police. The police, we imagine, do a job fraught with excitement, danger, violence, and death -- all in the line of duty. Day after day, we assume, they fight an epic battle between good and evil. But, as this volume shows, this image is mostly wrong. How Americans view police has varied dramatically through history. In 1856, New York police opposed wearing uniforms because they felt it represented a militaristic and nondemocratic type of organization. Today, our police model themselves on the military and use military tactics in the "war" on drugs.

Policing in America: A Reference Handbook chronicles our changing ideas and methods of social control, beginning with the first recorded instances. It traces the trends that have shaped America's unique policing system and our fascination with police. It also examines the hot-button issues that concern police scholars today -- such as the nature of the police subculture and police corruption -- and details the trends and issues that will shape the future of policing. An essential reference for those interested in -- and affected by -- the American system of policing, which impacts us all.