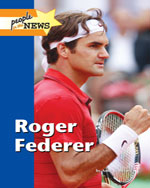 Admired for his perfect form, style, and finesse, tennis star Roger Federer has been ranked as the number one player in the world, and is arguably the greatest player in the history of tennis. He holds the record for the most wins in Grand Slam tournaments and has spent the most consecutive weeks as the number-one ranked player in professional tennis. This volume charts Federer's rise to fame from his early start as an impulsive, but talented, youth to the tournament wins that established him as a world-class athlete. The author also explains how Federer earned a reputation as a fair player, a polite and considerate sports hero, a humanitarian, and true gentleman both on and off the tennis court.