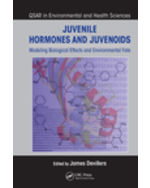 Juvenile hormones (JHs) are a group of structurally related sesquiterpenes secreted by the insect corpora allata. They affect most insect life-cycle stages and physiological functions, including embryogenesis, larval and adult development, metamorphosis, reproduction, metabolism, diapause, polyethism, and migration. Juvenoids such as methoprene, hydroprene, kinoprene, pyriproxyfen, and fenoxycarb are man-made chemicals that mimic the structure and/or activity of JHs, selectively targeting and disrupting the endocrine system of insects. They are particularly suited as larvicides for the control of pest and disease vectoring insects such as mosquitoes.Juvenile Hormones and Juvenoids: Modeling Biological Effects and Environmental Fate discusses the various modeling approaches that can be used to study the mechanism of action of JHs in insects and to estimate the adverse effects and the environmental fate of the juvenoids that mimic their activity. This book is the third of the QSAR in Environmental and Health Sciences series, but the first dedicated to the use of QSAR and other in silico techniques to provide these insights into JHs and their analogs.With contributions by an international team of scientists, the book begins with a historical survey of JHs and juvenoids. It then discusses biosynthesis of sesquiterpenoids followed by chapters covering JH activity such as morph-specific JH titers in crickets, and JH analog activity including soldier-specific organ development in termites and the role of methoprene in gene transcription. The book examines modeling approaches applied to resistance to JH analogs, to population dynamics of nontarget species in the presence of juvenoids, and to SAR and QSAR of JH mimics. The book concludes with a discussion on the use of multicriteria analysis for selecting insecticides for vector control.